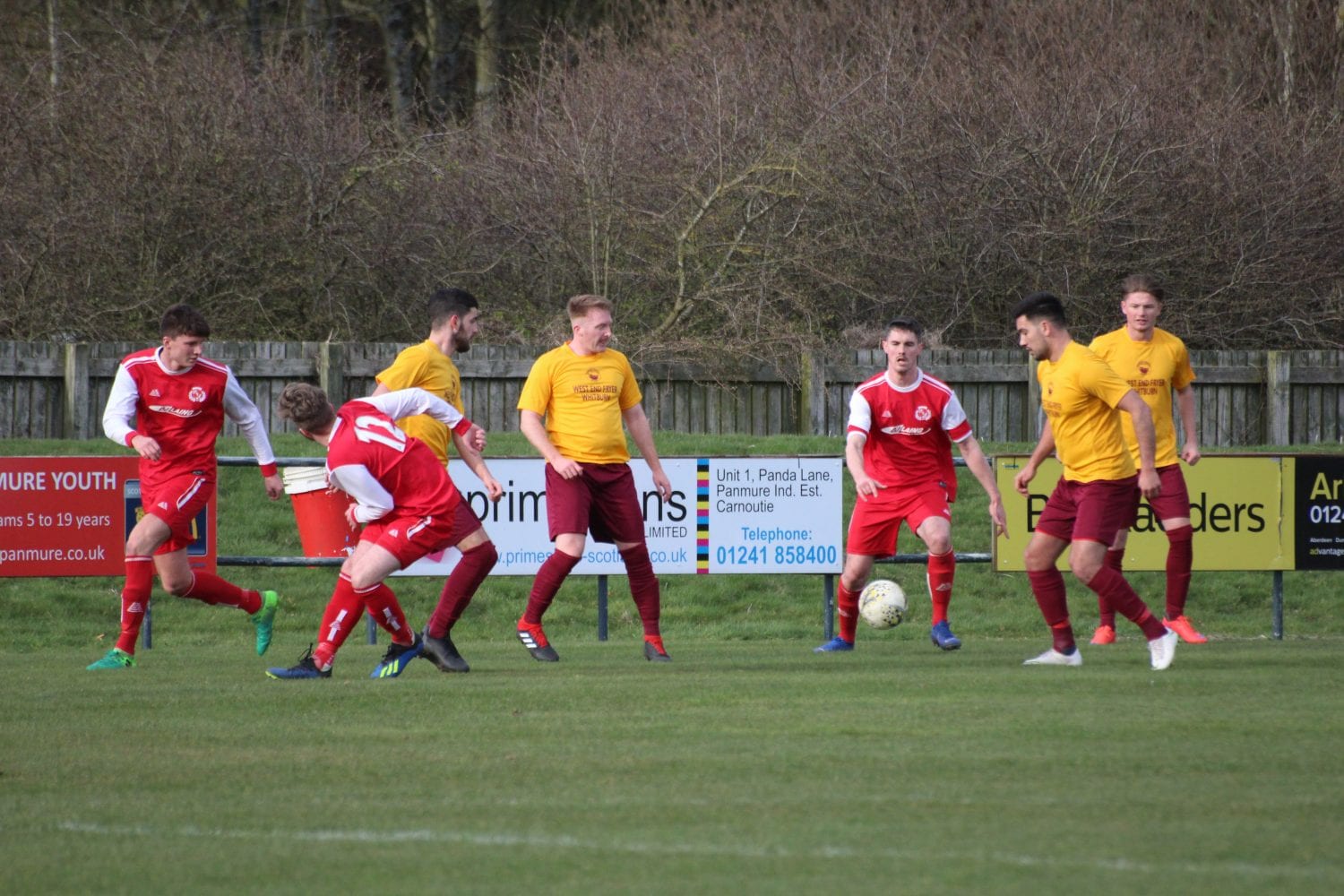 The Gowfers gave Lochee United a helping hand by beating leaders Whitburn at Laing Park in an incredible game that had everything including nine goals.

Carnoustie started brightly and should have taken the lead in the first minute but McPhee’s shot lacked power to beat Andrew Wilson in the visitors goal, then just a minute later Greg Gunn was lucky to escape punishment when he appeared to rake his studs down the back of McPhee’s calf under the nose of the referee. Next it was Pat Martin’s turn to spurn a chance when he was set free by a Sam Simpson pass but he lobbed the ball over the keeper and unfortunately over the bar. On 7 minutes a Jamie Winter free kick came for another foul came back off the far post with Wilson well beaten before it was Jamie Robbie’s turn to receive a nasty challenge, this time from Tomaszewski, whose studs up challenge also went unpunished. A goal mouth scramble on 15 minutes saw Ryan Dignan have a chance to score but Wilson’s juggling skills managed to keep the ball out. Dignan was the next to receive a hefty challenge when he was dumped on the sideline after a tackle from Boyle, the visitors were punished when Jamie Winters free kick was headed back across his own goal by a Whitburn head and Martin looped a great header over Wilson and in to the back of the net. Winter should have made it 2-0 on the half hour but his cross shot went wide but two minutes later it was 2-0, Carnoustie high press paid dividends when Winter dispossessed Gunn and Dignan rifled the ball in to the far corner well out of Wilsons reach. Carnoustie’s dominance continued and the visitors were grateful to Iain Griffin on 39 minutes when he cleared a Martin header off the line. In stoppage time, Carnoustie made it 3-0 but it was amid much confusion, Ross Gunn attempted to clear the ball in his own box but mistook the ball for Dignans head and although the referee initially didn’t appear to award a penalty, after consultation with his Assistant he did eventually point to the spot, but then booked Dignan for dissent, although the visiting support seemed to think it was for a dive. After all the confusion Sam Simpson stepped up and scored to send the Gowfers deservedly in front 3-0.

The Second half started with Carnoustie’s continued dominance and after just five minutes The Gowfers made it 4-0, Harvey Dailly gambled on an error from the keeper, waltzed between the two central defenders and when Wilson couldn’t hold the ball Dailly was on hand to score. The visitors had to do something and brought on Andy McQuillan and the substitution paid dividends as he headed home a Henderson free-kick although Paddy Conway appeared to be impeded from a challenge. Carnoustie restored their four goal lead just three minutes later, a strange clearance from Griffin bounced and spun back in to the path of Martin who made no mistake to score his second and The Gowfers fifth. It should have been six on 67 minutes, Baily Steel was clattered on the edge of his own box but the referee allowed the advantage as Martin raced away, as he entered the box he squared the ball to substitute Jamie McCabe but his effort was well saved by the boot of Wilson.  Whitburn were by now playing four strikers and getting the ball forward very quickly on 70 minutes minutes Steel appeared to be bundled off the ball for the umpteenth time but the referee allowed play to continue, the ball found substitute Brass who fired the ball past Robbie. Brass was extremely lucky to stay on the pitch on 82 minutes when he took exception to a bit of skill from Simpson and booted the Gowfers player six foot in the air. With four upfront, Whitburn’s tactics were no real surprise with the ball spending more time in the air than on the ground, but Carnoustie’ defence didn’t seem able to deal with the aerial bombardment that the RAF would have been proud of. On 82 minutes a throw in wasn’t dealt with and the third sub, Reece Duncan forced the ball home to make it 5-3 and on 88 minutes Gowfers supporters nerves were shot when Darren Liddell fired home from the edge of the box after a poor header out by Dailly. The Gowfers weren’t helped by the sending off of Mark Smith for a silly second booking in stoppage time but managed to hold out to take, what in all honesty despite a crazy last twenty minutes, was a deserved three points. After the game the Whitburn bench were heard to say that Carnoustie had let them off the hook at 5-1 and allowed them back in to the game.

Man of the Match : Pat Martin