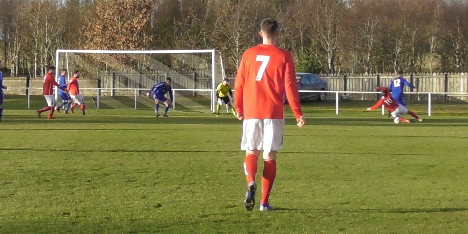 Carnoustie produced a real Jekyll and Hyde performance at Westview Park against Kirriemuir Thistle, resulting in a disappointing 4-1 defeat.

The visitors started the game brightly and had claims for a penalty after four minutes turned down by the referee when the ball was handled in the box. Carnoustie continued to press and should have gone in front on nine minutes when Pat Martin touched a Sam Simpson cross inches wide of the far post. The Gowfers did take the lead on 17 minutes, Martin flicked the ball on to Jamie McCabe who was unceremoniously tripped giving the official a simple decision to award a penalty. Simpson tucked the penalty away in to the far corner out of the reach of Kirrie keeper Sean Diamond. Carnoustie were well on top and Kirriemuir should have been reduced to ten men after 25 minutes when a throw ball from McCabe to Ryan Dignan, that would have seen the Gowfers man in on goal, was handled but  the referee decided to wave play on although there was no advantage to Carnoustie. The Gowfers continued to have chances and on another day could have been out of sight but their profligacy in front of goal was to come back and haunt them in the second half.

Whatever, Kirrie boss Chris Kettles said to his troops at half time worked and the home-side were a different beast after the break and that allied with Carnoustie’s inability to cope with a more direct approach saw the visitors under pressure and it was no surprise when the equaliser came just before the hour mark. A long free kick from Diamond was flicked on to Dale Reid, Ryan Roche appeared to have things under control until a slip saw Reid free, his shot was only parried by Jamie Robbie in to the path of Ryan Kerrigan who tapped the ball home. Three minutes later and Kirrie were in front, a corner from the right missed everybody in the box before dropping to Paul Sludden who scored from the edge of the box although Dale Reid was in an offside position in front of Jamie Robbie. The capitulation continued ten minutes later, a ball in to the box wasn’t cleared allowing Dale Reid to score from the edge of the six yard box unmarked. Reid was given the freedom of the penalty area on 79 minutes to head home a Sludden cross to make it 4-1.

A truly disappointing second half after Carnoustie had played arguably their best football of the season before half time.