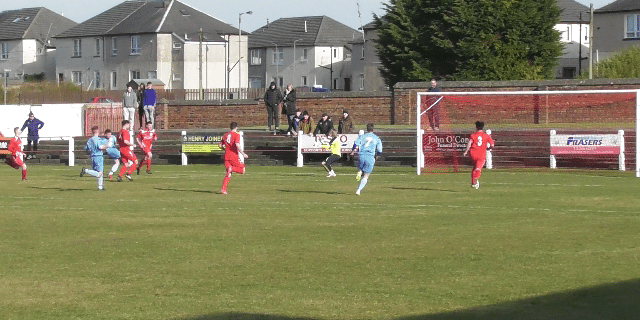 Camelon’s Carmuirs Park was somewhat surprisingly passed fit an hour before kick off by match referee Duncan Williams with the near side still crisp and hard in places. The Gowfers were forced in to changes to the side that had beaten Arthurlie, Ewan Buggins was ill and Sam Simpson working, manager Alan McSkimming opted for a change in formation with Pat Martin coming in to partner Ryan Dignan and Luke McGeehan replacing Buggins at right back.

Carnoustie started quickly and adapted to the playing surface, that despite not having hosted a game since November was very bumpy and uneven, the better of the two sides. The Gowfers took a deserved lead on 13 minutes when Ryan Lockie planted a great header in to the top corner off his own goal from a Pat Martin cross. Martin was proving a real handful and doubled the advantage after 21 minutes when he beat his man before curling a great shot in to the far corner from a narrow angle. The homeside pulled a goal back on 27 minutes when Lewis Small scored after a scramble in the penalty area and the Falkirk side were level five minutes later, the ball was played down the right, Steven Cook appeared to receive an arm in the face but play was allowed to continue and the cross was met sweetly by Alan Sneddon with a great finish to equalise. Despite Carnoustie having the better of the chances the scores remained level at the break.

Carnoustie continued to create chances in the second half but spurned at least three good chances before the homeside took the lead. The Gowfers defence were caught napping at a quick throw and Ryan Kane poke the ball home at the near post on 54 minutes. Camelon increased their lead on 73 minutes when Sneddon seized on hesitancy at the back to make it 4-2. Carnoustie continued to press but could find the back of the net with Dean Shaw in great form in the Camelon goal. The Gowfers did pull one back on 86 minutes whena Steven Cook shot was deflected in to his own net by the impressive Don Morrison but despite more chances failed to find an equaliser . 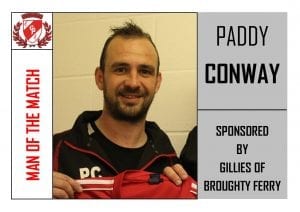