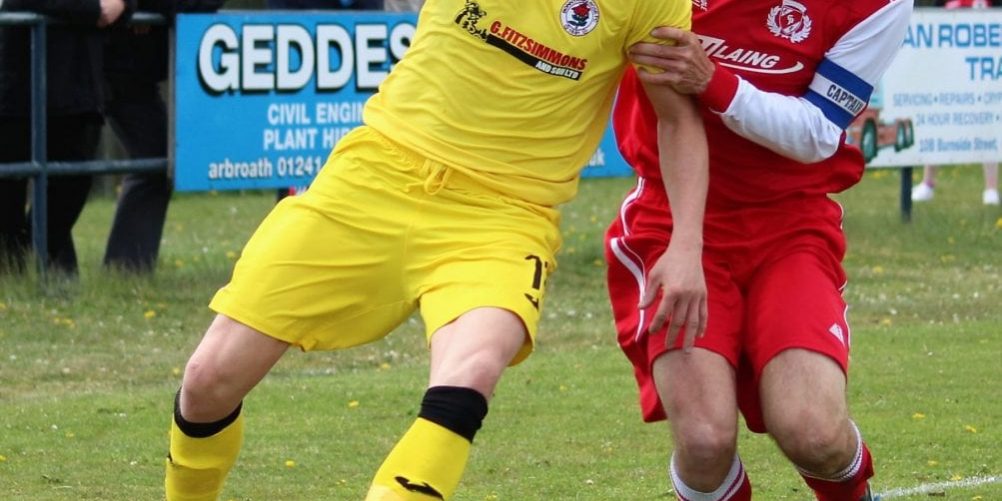 Carnoustie went in to the game knowing they would be up against it with the visitors just a hairs breadth from the Super League title.

Panmure boss Alan McSkimming  was forced into changes to his side, Full back Luke McGeehan will miss the rest of the season with a broken wrist so Stephen Cook reverted to right back, Ewan Buggins replaced Ryan Roche , Stuart Gersok replaced Pat Smith and Chris Liversedge made his full debut in place of Michael McIlravey.

Bonnyrigg started the brighter, playing slick passing football. A fifth minute free kick by Nelson was turned behind by Buggins. The visitors took the lead on 8 minutes, a poor clearance by Macpherson only went as far as McIntosh, he took a a couple of touches before placing the ball beyond the keeper and in to the net. It was nearly two on twelve minutes when Turner got his head to a routine long ball but his attempt went wide. Bonnyrigg doubled the advantage on 16 minutes, a pinpoint cross from Donaldson found McGachie who placed his header in the top corner. They almost scored a third a minute later when a superb ball from Nelson was put inches wide by McIntosh. It was 3-0 though on 38 minutes, Macpherson pulled off a great save from McIntosh, unfortunately the ball rebounded to Turner who scored in to the open net.

Macpherson pulled off a great save early in the second half to deny Turner, Despite plenty of possession in the centre of the park, Carnoustie couldn’t find the final pass that created problems for the Rose defence and it was no real surprise when the visitors increased their lead, a poor clearance found Stewart who volleyed home from the edge of the box in to the far corner. Pat Smith was introduced in place of the injured Steven Cook and started to cause problems with his pace. He was denied what looked like a clear penalty on 88 minutes when Hoskins pushed him over in the box. Bonnyrigg completed the scoring in the third minute of injury time when Hoskins headed home from a corner.

A bad day at the office for Carnoustie and it doesn’t get any easier with a trip to Linlithgow on Monday night to contend with.