Carnoustie climbed out of the bottom three, above Jeanfield, following a good 2-0 win over a physical Sauchie Juniors at Laing Park.

Gowfers boss Alan McSkimming was forced in to a change with Bailey Steel coming in for Paddy Conway who was unavailable, Ryan Roche and Adam Harwood continued at the heart of the defence and Jake Mair kept his place ahead of Sam Simpson.

Carnoustie dominated the first half and should have been in front before Greg Soutar pointed to the spot on 33 minutes, after a handball in the box. With regular penalty take Simpson on the bench, Ryan Dignan took responsibility and made no mistake sending the visitors keeper the wrong way to put The Gowfers in front. Pat Martin had already fell foul to a stray elbow before Dignan was clattered in to eight minutes before half time, it looked a really bad challenge, however, the culprit escaped with a yellow card.
The second half was again all Carnoustie with the visitors lack of discipline continuing which saw Sauchie boss Fraser Duncan sent off for contesting a decision. Despite being fully in charge it wasn’t until 78 minutes that the game was put to bed, a counter attack saw Dignan play a great ball through to Jake Mair, the rapid winger left his marker for dead before crashing the ball in to the roof of the net to secure the three points.

The Gowfers win, combined with Jeanfield Swifts defeat at home to EOS bound Hill Of Beath, saw Carnoustie jump above the Perth side and out of the bottom three. The other game at the bottom between Kennoway and Forfar West End was postponed. 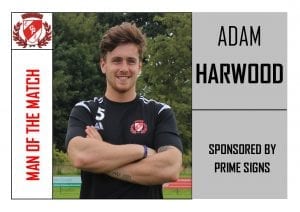