CUP RUN ENDS AT THE HANDS OF TALBOT 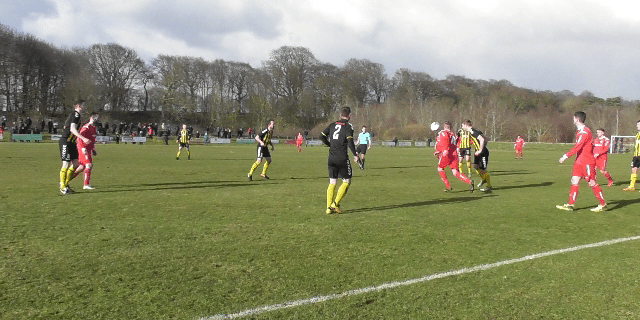 Carnoustie’s run in the Scottish Junior Cup came to a disappointing halt at a wintery Laing Park on Saturday afternoon. Two first half goals from visitors Auchinleck Talbot were enough for the Ayrshire giants to take their place in the Semi Finals and bring to an end the Gowfers impressive run in this seasons competition.

Manager Alan McSkimming reverted back to the starting eleven that had played so well during the run but they never rose to the heights previously achieved. The visitors were on the front foot from the off and deservedly took the lead on 15 minutes when fullback William Lyle seized on a mistake by Sam Simpson before being allowed space to progress and place his shot beyond Alan Cormack in to the far corner. Talbot increased their lead on 38 minutes when Graham Wilson beat Alan Cormack at his near post and with the visitors leading 2-0 at the break, it would be an uphill struggle for Carnoustie to pull it back.

The Gowfers were much improved in the second half but despite having plenty of possession failed to put any pressure on Talbot keeper Andy Leishman. With five minutes remaining Sam Simpson received his second booking for a rash challenge and Carnoustie were reduced to ten men making their task even harder.

A disappointing end to what has been an enjoyable and highly commendable cup run, now the focus shifts to the league campaign and the battle to stay in the Super League.

Man Of The Match – Ewan Buggins