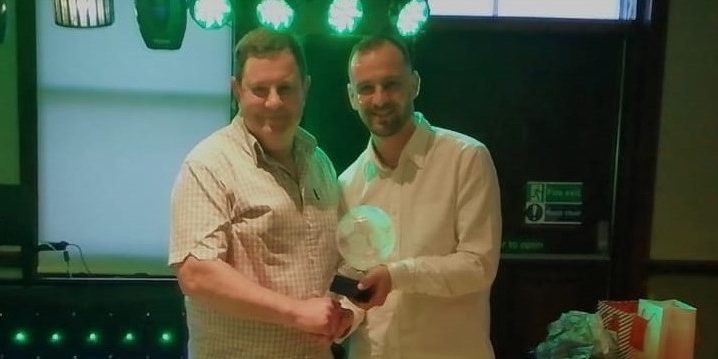 The D J Laing Award is presented by Carnoustie Panmure FC as part of its annual awards and is presented to somebody outside of the football club who has gone above and beyond the call of duty on our behalf.

Normally the award is announced at our Player of the Year Night but as will become clear we presented the award early.

This is the third year the award has been presented and this year’s recipient is Mr Phil Hope.

Last night saw a leaving party arranged for Phil, during which it was also announced that the 3G facility will in future be known as Hope Park.
Phil has been a massive help to us as a club, particularly in negotiations with Angus Council, as well as a sounding board for ideas.

His departure will leave a massive hole not just in the Community Club and Youth set up but in Community of Carnoustie as a whole.

We would like to wish Phil all the very best for the future and you will be welcome back at Laing Park at anytime.
Phil is pictured receiving his award from Paddy Conway.