Carnoustie Panmure Skipper Steven Cook brought the curtain down on a 19 year career and 12 seasons at Laing Park with a typical Man Of The Match performance as he led his side to a 2-0 win over Glenrothes.

The Gowfers interim management team of Grant Miller, Bobby Brown and Russell Brown were forced in to changes due to the long injury list and decided on a change of formation to 3-5-2. Derek Paterson, Paddy Conway and Ewan Buggins were the back three with Cook and Sam Simpson as wing backs. Jamie Winter, Bailey Steel and Pat Martin were the midfield trio with Ryan Dignan and Mark Smith the strike force.

Initially, Carnoustie struggled to get used to the new system which was in fact mirrored by the visitors but the gradually began to take control and took a deserved lead on 34 minutes. Paddy Conway surged forward before finding Ryan Dignan, he had lost his man but saw his effort turned away by Jack Small in the Glens goal but only as far as Mark Smith who was on hand to stab the ball home.

Carnoustie continued to dominate after the break but couldn’t find the killer touch to put the game to bed until on 87 minutes, a Jamie Winter shot was blocked on the edge of the box, the ball looped over to Sam Simpson on the right who was pulled down by substitute Stephen King in the box leaving the referee no alternative than to point to the spot, Simpson took the kick himself and fired the ball down the centre of the goal as the keeper dived to his left.

A hard working performance from Carnoustie with a number of players in odd positions in a system that they weren’t used to but there was only ever going to be one Man of the Match and that was the skipper, Steven Cook 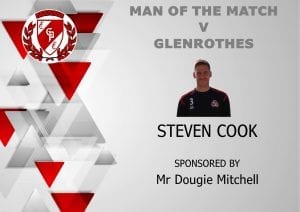