Carnoustie coped with the incessant wind and rain, the infamous Aberdeen roadworks and a physical approach from their hosts to record their second victory of the season at Longside and set up a G A Engineering Cup Quarter Final at home to Jeanfield Swifts.

With half an eye on next weeks Scottish Junior Cup Quarter Final and also the need to give players game time, Gowfers boss Alan McSkimming made several changes to his starting line up. Jamie Robbie made his comeback from injury and Ryan Roche was back for his first game in a year also after injury. Ewan Buggins came in for Luke McGeehan while Bailey Steel partnered John Roberts in the middle and Marc Walker got a chance in place of Robert Urquhart. Sam Simpson came in for Jamie McCabe while Pat Martin retained his place, partnering leading scorer Ryan Dignan.

The Gowfers adapted well to the driving rain and strong wind, taking a deserved lead on 18 minutes. A Carnoustie attack was only partially cleared and Ryan Roche put the agony of the last twelve months behind him as he rifled the ball in to the top corner from 30 yards. The conditions made football extremely difficult and although Longside had worked very hard to get the game on, the pitch was quite uneven.

Carnoustie went in at the break leading 1-0 but it was two just 60 seconds after the restart. A corner wasn’t cleared and after three attempts on goal were blocked, Steven Cook crashed the ball home from close range. Longside came back and pulled a goal back on 53 minutes but couldn’t capitalise on the goal with Carnoustie spurning several chances to extend their lead until Pat Martin made sure with 12 minutes remaining.

A tough game in horrible conditions but comfortably won in the end to secure that Quarter Final at Laing Park against Jeanfield.

Man Of The Match was a difficult decision this afternoon with several contenders, a special mention must go to Ryan Roche who after return after a year out won every header he contested even after receiving a head knock and finishing the game with a hefty bandage on his head, however, this afternoons Man Of the Match is Pat Martin 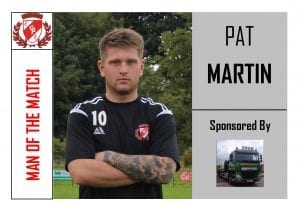