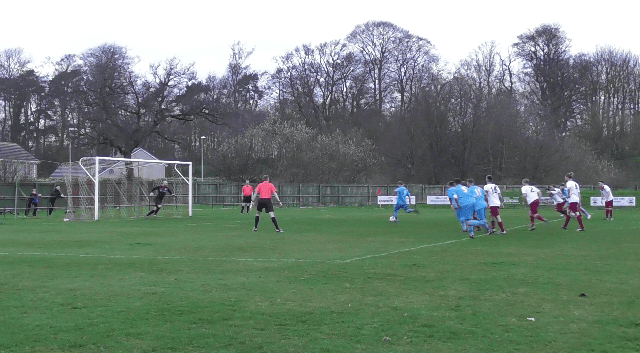 Carnoustie were comfortable winners over Jeanfield Swifts in the Quarter Final of the GA Engineering Cup on Wednesday night.

Manager Alan McSkimming decided against making many changes to the side that beat Sauchie at the weekend, Alan Cormack came in to the starting eleven in place of Jamie Robbie and Jamie McCabe replaced the suspended John Roberts.

Carnoustie started brightly and took a deserved lead after just ten minutes when Robert Urquhart met a cross from Jake Mair and crashed the ball in to the roof of the net. The home side should have been further in front at the break but were unlucky not to increase the lead.

However, within ten minutes of the restart it was 2-0, Ryan Dignan appeared to be hauled down in the box by Jeanfield’s Chris Anton and referee Robin Taylor pointed to the spot, Jamie McCabe took responsibility and sent Mark Mitchell the wrong way to double the Gowfers advantage. On 71 minutes it was 3-0, Sam Simpson, who had replaced Urquhart, swung in a corner, Jamie McCabe was unlucky to see his shot come back off the post but Adam Harwood smashed the ball in to the back of the net from six yards. Jeanfield were given a lifeline with five minutes remaining when Adam Harwood was penalised for an apparent foul in the box, Substitute Tony Holt converting the spot kick. However, Carnoustie held firm and without any drama ended the game 3-1 winners.

A comfortable win for The Gowfers and a deserved place in the Semi Finals at home to North Region side Stonehaven.