Carnoustie Panmure restored their seven point lead at the top of the Super League North with a comfortable 4-1 win over Dundee North End, a result that ended North Ends run of ten games unbeaten.

Gowfers boss Phil McGuire made two changes to the side that had beaten Luncarty two weeks ago, Bailey Steel came in for Paddy Conway and Brian Clark came in for Paul McLellan who was due to become a father, Keiran Sturrock was on the bench against his former club

The game started brightly on a surface that was soft but playable and got better as the game went on and the home side were on top for the opening ten minutes but The Gowfers came in to it and took the lead on 23 minutes. Bailey Steel found Sam Simpson on the right and he fed Brian Clark, Jamie Winter was screaming for the ball and once fed by Clark, curled a wonderful strike past Neil Ferrie in to the back of the net. Nine minutes later it was two, Winter found Ryan Dignan and as the striker held off the defender he rifled the ball in to the roof of the net, giving Ferrie no chance. Carnoustie were playing some great football at this point and North End were struggling to lay a boot on them and it was no surprise when a piece of genius from Dignan right on half time, saw him curl the ball beyond Ferrie and in to the net from 30 yards

North End made a change at half time with Gary Sutherland replacing Owen McCabe and the home side switched to a more attacking formation. The change got its reward on the hour mark when Sutherland timed his run perfectly on to a McArtney pass and slipped the ball past Jamie Robbie to pull a goal back. The Gowfers were in no mood to let North End back in to the game and restored the three goal cushion on 73 minutes. A free kick from Winter, born on the training ground, found Pat Martin, he found Clark who placed the ball in to the bottom corner well out of Ferries reach. The home side were given a chance to pull a second goal back on full time when Ryan Dignan was penalised for handball but Sutherland put the penalty high over the bar.

Forgans of Broughty Ferry Man of the Match  –  Ryan Dignan 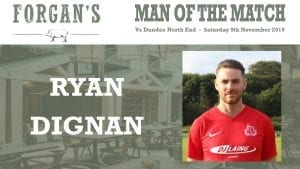 PrevPrevious“IT IS IMPORTANT WE DEVELOP OUR OWN PLAYERS”
NextGOWFERS GAMBLE JACKPOT UP TO £16,100Next
NEXT MATCH
LAST MATCH
NEXT MATCH