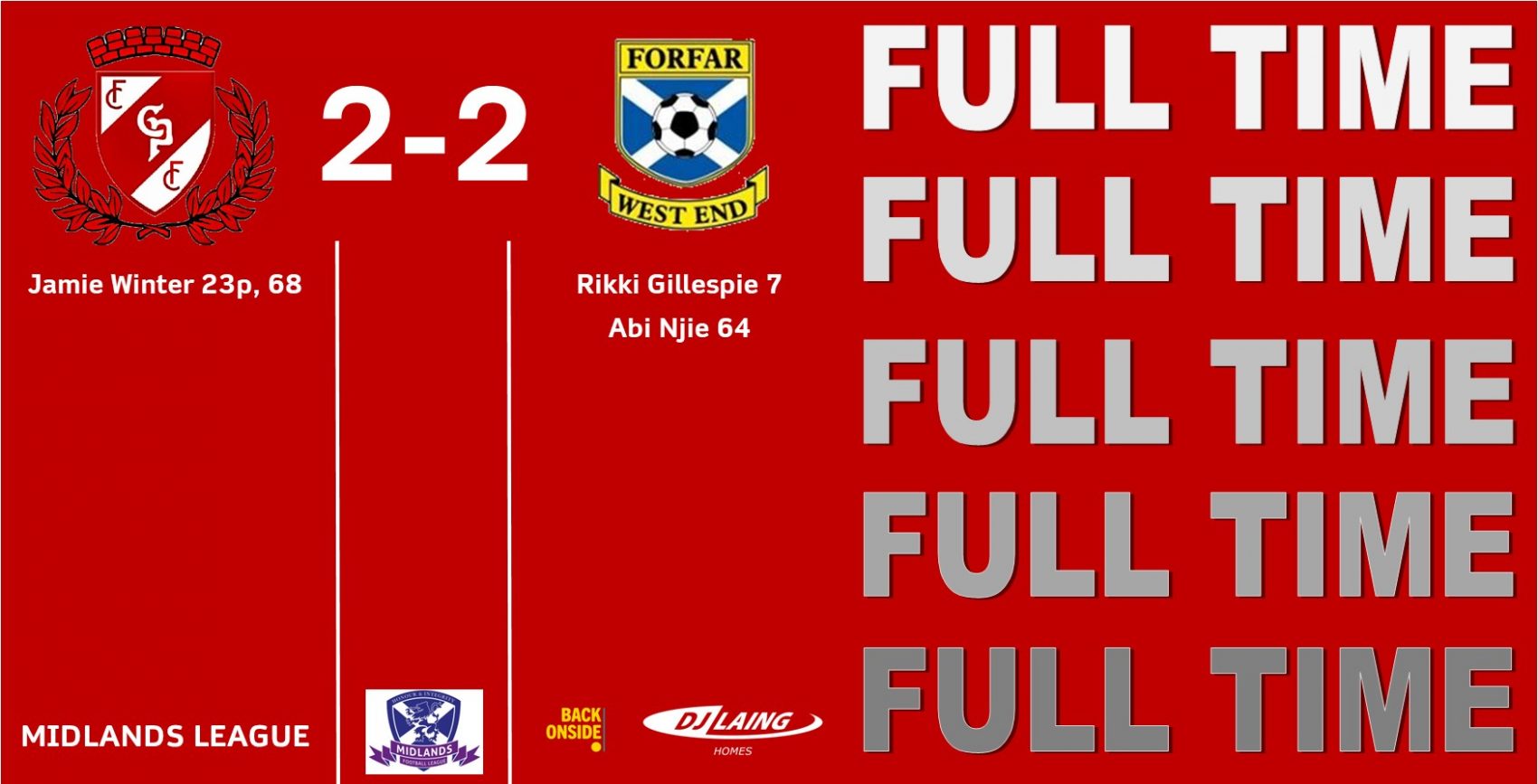 Carnoustie Panmure had to settle for a point at home to Forfar West End after coming from behind twice but it wasn’t the performance of the teams that was the main topic of conversation as spectators made their way from Laing Park.

Gowfers Manager Phil McGuire made a number of changes, as expected, to the side that beat Coupar Angus at the weekend with Ryan Roche, Jamie Winter and Connor Coupe coming in for Robert Smith, Cammy McMahon and Bruce Hearn, while Alan Cormack was unavailable and Carnoustie Panmure youth product, Lewis Harrison, made his debut in goal

The visitors started brightly and took the lead on 7 minutes, a Carnoustie move broke down in midfield and Abi Njie fed the ball wide before the ball found Rikki Gillespie who beat Harrison at the front post.

The Gowfers were dealt a blow on 20 minutes when captain, Ryan Roche, had to be replaced by Bruce Hearn due to an ankle injury but within three minutes of the substitution being made, Carnoustie were level. A header in midfield by Jamie Winter was flicked in to the path of Ryan Dignan by Dale Reid, Dignan bore down on goal and as he was about to pull the trigger his ankle was clipped by Dale Riddell and the referee pointed to the spot, the Gowfers support expected  a red card but the referee only produced a yellow. With the usual penalty taker Sam Simpson on the bench, Winter took over spot kick responsibilities and smashed the ball straight down the middle to equalise for Carnoustie.

The officials, who had made several questionable decisions in the first half and annoyed both sides, brought the half to an end without any added time.

After the break it was more of the same with one assistant and the referee looking to get involved at every opportunity, then on 62 minutes West End were reduced to ten men when Riddell was shown a second yellow card for a trip on Dale Reid. Unfortunately, the sending off fired up the visitors and they went in front on 64 minutes, a long ball down the middle looked like it was going to be dealt with by Harrison and Kieran Conway but instead the ball fell to West End and Abi Njie put his side back in front.

The Gowfers were level once more within a minute of the game restarting and it was that man Winter once again, Dale Reid received a quick throw from Bailey Steel and was impeded by former Carnoustie defender Barrie Gourlay and the referee gave a free kick 25 yards from goal. West End set up a five man wall but it was an irrelevance as Winter struck a great free kick in to the bottom corner to equalise for a second time.

The nearside Assistant Referee had already reported West End, Assistant Manager Kevin Longmuir to the referee earlier in the game and levelled things up by reporting Phil McGuire, that saw the Gowfers manager join Longmuir in his book.

The Assistant Referee had to ask the Match Referee how long was left as he hadn’t started his watch for the second half which started a period of stop start from the officials that had everybody bewildered. West End were reduced to nine man on 88 minutes when Andy Webster, a 70th minute substitute received a second yellow card on the instruction of the other Assistant Referee in an incident that saw Gordon Macdonald also booked. In the aftermath, Longmuir received his second booking and was also sent off. That wasn’t the end of it, a ball over the top by West End looked to set Fleming in on goal and when he went down, most expected the referee to point to the spot and show at least a yellow card but waved play on, infuriating the West End bench. After so many stoppages in the second half, the crowd were somewhat surprised, once again at the lack of added time when the referee blew the full time whistle, however, the West End bench were still raging at the lack of a penalty and unused substitute Ross McLeary was sent off for comments made to the Assistant Referee and the Officials had to be escorted from the pitch.

The Back Onside Man Of the Match was Finn Kemlo