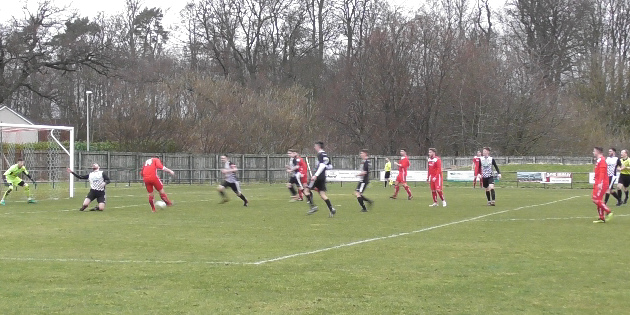 Carnoustie Panmure defeated Scone Thistle with two late goals a week ago and they were at it again with two goals in the last four minutes to take a point from a 2-2 draw at home to Fauldhouse United, leaving anybody that left early, kicking themselves.

Injuries and absences saw Phil McGuire have to change his side yet again, Paddy Conway partnered Harvey Dailly at the back and Mark Smith partnering Ryan Dignan in attack.

The visitors started well but Jamie Robbie was relatively untroubled until midway through the second half when a lapse at the back saw Aiden Malone put Fauldhouse in front, scrambling the ball home at the back post. As the half continued Carnoustie continued to have the greater percentage of possession but were let down by poor finishing and decision making in the last third.

The second half started much the same with Carnoustie on the front foot, however, they were undone on 71 minutes by a Fauldhouse counter. Dailly’s clearance ricocheted off a Fauldhouse player, allowing Ryan Smillie to race clear before lobbing the advancing Robbie from the edge of the box. Carnoustie refused to give up and upped the pressure further on the visitors goal as wave after wave of Gowfers attack poured forward. The initial reward came on 87 minutes when the Fauldhouse United keeper made a mess of a Pat Martin effort and Ryan Dignan slid in to poke the ball home and it didn’t finish there. With a further sixty seconds on the clock, the visitors keeper could only parry a Dignan header in to the path of Jamie McCabe who rammed the ball home for a deserved equaliser. Carnoustie had a great chance to win the game after the referee awarded an indirect free kick for a back pass but the kick went wide.