GOWFERS STRIKE EARLY BUT SETTLE FOR A POINT

Carnoustie’s threadbare squad made the trip across Angus to Strathmore Park to take on Forfar West End in the McBookie.com Super League and despite taking an early lead they had to settle for a point from a game that ended with both sides down to ten men.

Manager Phil McGuire was forced in to changes and fielded three trialists on the bench and started the game with only nine fully fit players, on the plus side new signing Harvey Dailly was on the bench.

The Gowfers started really well, once again employing  defensive three and took a deserved lead on 5 minutes, Sam Simpson did well on the left before finding Steven McPhee on the edge of the box, McPhee, who was making his return from injury beat two men before leaving Gary Thain clutching at thin air as the ball hit the back of the net. Carnoustie continued to dominate play but that advantage began to dwindle as West End came back in to the game. Carnoustie were caught out five minutes before half time on the Forfar left and Andrew Walls, a substitute for former Gowfer Michael McIlravey, was unmarked at the back post and slammed the ball past Jamie Robbie.

Carnoustie had the better of the second half with Thain pulling off a number of saves while Jamie Robbie was relatively quiet at the other end. With the game heading for a draw it exploded in stoppage time, Andrew Walls escaped on the West End left and was unceremoniously brought down by Barrie Gourlay who was shown a straight red card for the challenge, with the match referee looking like he had the situation under control until a stramash broke out on the pitch involving several players, during which Pat Martin was struck in t the face, the referee showed a red card to Forfar West End sub Robbie George. The referee brought the game to a close shortly after. 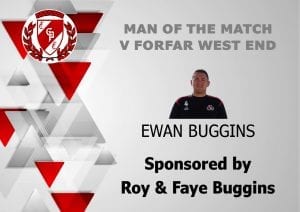