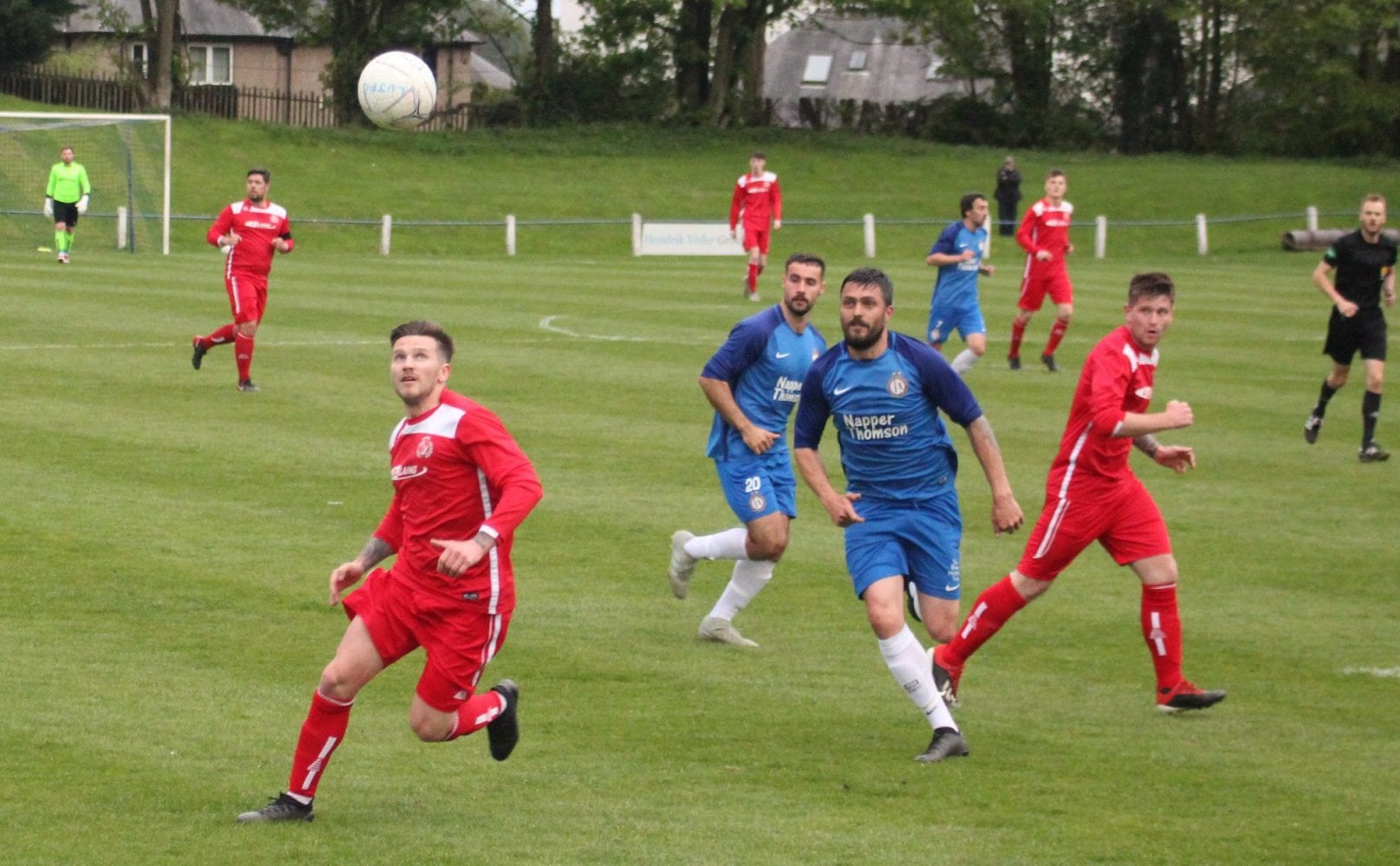 Carnoustie travelled to Thomson Park in the D J Laing East Region Cup just five days after hosts Lochee United had won 4-0 in the Super League. Only three teams had beaten United prior to the game, Auchinleck Talbot, Hermes and East Craigie, at 8.45pm they were joined by Carnoustie Panmure after an inspired Gowfers side trounced Lochee, who finished with nine men, 5-2 to secure a Quarter Final against Dundee North End next week.

Gowfers boss Phil McGuire made just one change to personnel with Ryan Roche returning and Jamie McCabe dropped to the bench, however, it was a change to the game plan that proved to be the undoing of United, that and two red cards.

Carnoustie came out of the blocks flying and it was instantly obvious that this may have been virtually the same team that had been beaten 4-0 but the attitude and desire was totally different. The rewards for the blistering start started to come on 7 minutes when Kieran McWalter blocked a Pat Martin shot with his hands and the referee pointed to the spot and booked the Lochee man. Sam Simpson gave Jordan Millar no chance, slamming the ball in to the bottom corner despite the big keeper guessing correctly. Lochee were stung in to action and were level within three minutes, Reece Ritchie scoring from the edge of the box after a quick passing move from the home side. Carnoustie were back in front on 14 minutes when Pat Martin rifled the ball home from 15 yards despite United claims for hand ball. The Gowfers dominated play but failed to convert a number of chances, leaving supporters wondering if these would prove costly, but they needn’t have worried as on 39 minutes Millar came out to clear a back pass, missed the ball completely and with the keeper stationary, Ryan Dignan raced through to make sure of the goal and Carnoustie led 3-1 at half time.

Carnoustie knew that they couldn’t afford to let Lochee back in to the game and it was effectively game over, ten minutes in to the second half. Bailey Steel was played in and after advancing into the area was unceremoniously brought down by McWalter and the referee once again pointed to the spot and showed the United full back a second red card and the home side were reduced to ten men. Once again Sam Simpson stepped up to take the spot kick and like his first, gave Millar no chance and made the score 4-1. The home side started to loose their discipline and were reduced to nine men on 85 minutes when Bryan Deasley, a half time substitute for Conor Birse, was shown a straight red card for comments made to the Assistant Referee. Carnoustie gave a display of a fast break on 87 minutes as the ball was cleared to Jamie Winter on the right, the Gowfers sold Stephen McNally a superb dummy, looked up and saw Michael Cruickshank of all people flying towards goal, with Steven McPhee screaming at him to take the ball in to the corner, Winter hit a delightful cross and Cruickshank rose like a Salmon, more commonly found further up the Tay, to head the ball past Millar and in to the back of the net. Reece Ritchie manged to score a second for Lochee in stoppage time but it was a scant consolation for the home side who exited a third cup competition.

A brilliant performance from Carnoustie against a Lochee side that had beaten them 4-0 five days earlier.