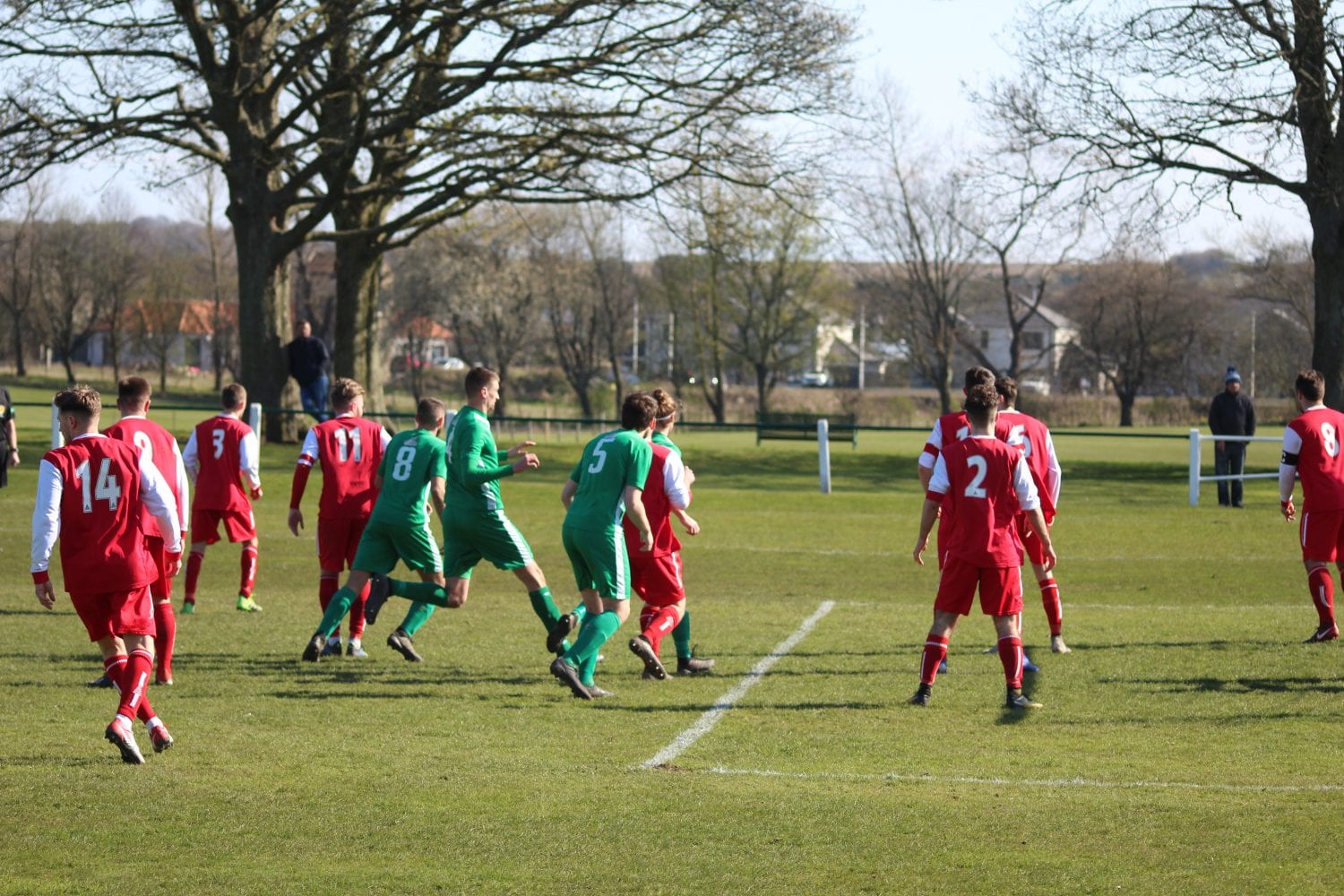 Thornton Hibs were flying and Carnoustie may as well have not bothered turning up for todays game, that was the feeling of the local pundits before this afternoons Super League clash at Memorial Park. The Gowfers had other ideas and with manager Phil McGuire’s game plan carried out to the letter, it was Carnoustie’s turn to enjoy a late winner as Sam Simpson’s 93rd minute penalty secured a deserved three points.

McGuire made changes to the side that lost 3-2 at home to Downfield, Mark Smith, Alan Cormack and Paddy Conway dropped to the bench with Liam Scott making his first start for over two years, Bruce Hearn and Jamie Robbie returning with the manager changing to a flat back four and Bailey Steel marking Thornton’s influential Garry Thomson.

Neither side started well and both struggled to cope with a strong wind, then after just five minutes Ryan Roche went down holding the back of his thigh and had to be replaced by Paddy Conway. Carnoustie’s first chance didn’t come until the 22nd minute but Sam Simpson saw his effort go wide. Pat Martin was the next to see a shot go wide before Thornton had the better of the last fifteen minutes but even then didn’t really trouble Jamie Robbie.

The wind had eased a little as the second half began and the home side started brightly having three chances in the first six minutes before Carnoustie had claims for a penalty turned down after Pat Martin was felled in the box. Thornton had more chances but the Gowfers back lane held firm with Hearn, Conway, Dailly and Cruickshank in determined form in front of a confident Jamie Robbie. on the hour mark, Thomson got away from Bailey Steel for probably the only time in the game and showed how dangerous he can be by hooting just over the bar. Paddy Conway was injured on 71 minutes when he fell awkwardly  making a brilliant tackle in the box but after lengthy treatment was able to continue. With fifteen minutes remaining Gordon Macdonald playing as a trialist replaced Jamie McCabe and instantly proved a real handful for the Hibs back line. Deep in to stoppage time Pat Martin was tripped in the box and referee, Billy Cooper pointed, to the spot. Sam Simpson kept his nerve, sent the keeper the wrong way and secured a great three points for his side.

Not a pretty performance but they don’t have to be, Arsenal won a title on hard working 1-0 wins. Every man can feel pleased with their performances at a tricky venue, they stuck to the game plan and got the reward. On to Wednesday night and Broughty Athletic in the League Cup at Craigie Park, the home of Dundee East Craigie.