It looked like todays clash between Luncarty and Carnoustie Panmure at Brownlands Park was going to end in a goalless draw despite both sides having chances in front of goal but the game came to life with twenty minutes to go and by the time the referee’s whistle concerto finished both sides had twice with two goals coming deep in to stoppage time.

Manager Phil McGuire made one change to the side that beat Tayport three weeks ago, Ryan Dignan coming back in for Gordon Macdonald but otherwise it was the same starting eleven.

The game started with Carnoustie on the front foot but showing signs of rustiness after missing two weekends of action passed up early chances to take the lead and Luncarty came  in to the game. With a number of confusing decisions from the referee tempers were getting a little frayed and the game became scrappy and neither side could find the cutting edge that might lead to a goal.

The second half was much the same with the game becoming disjointed due to frequent shrill blasts of the officials whistle. Carnoustie were forced in to  a change on 65 minutes, Jake Mair appeared to be pushed in the box but the referee gave a goal kick, however, Mair remained down and had to receive treatment but it quickly became obvious that he wouldn’t be able to continue and was replaced by Michael Cruickshank while Gordon Macdonald replaced Pat Martin. With Carnoustie still trying to reorganise, Luncarty took the lead on 68 minutes when a corner was bundled over the line in a crowd of players. Carnoustie were stunned but equalised on 78 minutes, Sam Simpson sending the keeper the wrong way from the penalty spot after Dignan had been brought down by the home keeper.

After the game and a trip to hospital it was announced that Jake Mair had dislocated his shoulder that had been relocated under sedation. 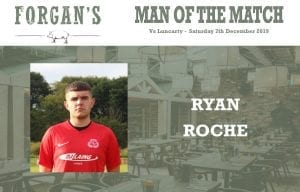