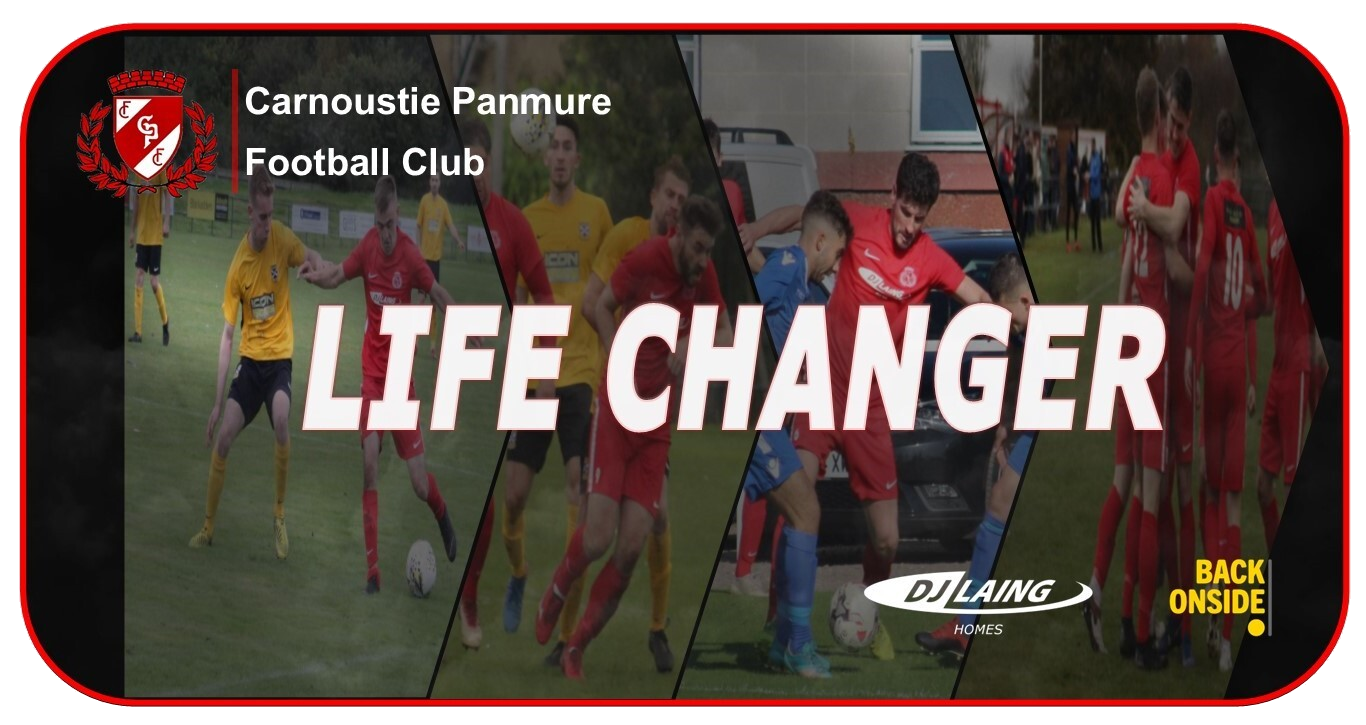 To mark Mental Health Awareness Week, we are pleased to be launch a new feature called Life Changer where we will speak to people from all works of life about moments that have changed their lives.

Our first guest is our own Club Chaplain at Carnoustie Panmure, John Toller

Hi John, Thanks for being the first person to talk to us for Life Changer. Let’s start by you telling us what your Life Changer was?

There are a few things that have been life changers for me – marriage, kids, leaving the academic world to become a minister…. But there was one which at the time I didn’t even realise was so significant – the night I didn’t follow through on a plan to end my own life

What was the background to the situation ?

It was back in 2006 – I had suffered from a level of undiagnosed depression since I was about 11, and hit a very deep low that year. There was no obvious reason for it – I was doing well academically, studying for my masters; had close friends, including my flatmates of the time; was involved in church and well respected; didn’t really want for anything. However, I was very lonely, and felt guilty for being lonely since I had good friends; I felt worthless despite all I had. It got to a point where I was lying in bed at 1am on a Saturday night and decided I would get up, take my parents car, which I had most weekends, and drive it at speed into a nearby factory wall, at the bottom of a hill. I’d reasoned away any objections – figured I wouldn’t be much missed – and it was a very cold, calculated decision

To make that decision, you must have been in a horrible, dark place. What changed your mind?

That’s the bit that’s hardest to answer! I just suddenly felt a sense of peace, and a sense that things would be OK, that I didn’t need to end my life. People talk about light at the end of the tunnel – I can’t even say I experienced that, as far as I was concerned I was still in the dark – but I just knew that there was a light somewhere, and it would be clear in time. I know not everyone believes in God, but for me my faith was central to it – I just knew there was a reason to live, even if at that point, I didn’t know what that reason was.
A big part of me was looking for things to just get better, for some kind of obvious Life Changer, some moment that made it clear I’d at least turned the corner. I didn’t get that, and I guess that’s what drove me down into that very dark place; but that decision to keep going, over time, helped me to realise that even in the very darkest place, even when there isn’t that obvious life changing moment, there are things I could hold on to, to help me carry on.

Did you speak to anybody at the time or was it something you felt that you could deal with on your own ?

Stupidly, no I didn’t speak to anyone! I count myself blessed that I survived despite my stubborn refusal to talk to people! My closest friends knew things were not all they seemed, but I’d had 10 years practice at putting on an act and by then I was pretty good at it! I wouldn’t let people know how bad things were; I was afraid they’d think less of me for it. One thing that changed that night was that I realised I couldn’t deal with it myself – a huge step for most people with depression, but even then it took a lot of time for me to do anything about it!
One of the first people I opened up to in any way was a friend who became a best friend, who became my wife! I should have realised then that knowing I suffered from depression wouldn’t drive my friends away, but it still took a long time for me to become more open about it; I was too stubborn to even go to a doctor and accept medicine until my last bad low, two summers ago – another 12 years later! I’ve survived, but I’ve no doubt it would have a been a less difficult journey if I’d been more open

You are now our Chaplain at Carnoustie and let’s just say it’s been an up and down year, do you think your own experience has helped with some of the lows ?

Definitely. Over time, particularly from that very dark period, I’ve learned that I have no guarantees that I’ll be free from depression – but that there are things I can do, things I’m blessed with in life, that can help me get through and can prevent it from getting as bad as it did then – one big thing from that experience was that I never wanted to get that low again! I’ve also learned that there are no easy fixes, so getting married didn’t suddenly take away loneliness, anxiety, or depression, but there are things that are relatively easy which can make a real difference, like sharing the burden of how I feel.

In terms of how I deal with lows now – and how I relate to other people who may be struggling, or who could be affected by lows – that experience has had a hugely beneficial impact. I’ve learned how to value and be grateful for what I have, even the small things, I see it all as an amazing gift; and just by talking about these things in a positive way, and (hopefully) helping others do the same, it gives a real lift, helps to see not just positives but also purpose for ourselves. Of course through my own experience I’ve learned just how important it is to recognise the gift of people around me who can help, people I can and must rely on. To be honest, I don’t mind if people – friends, church members, folks at the club – don’t come to me specifically; if I’ve helped encourage them to speak to someone, whether a friend or a professional, that’s a result

Finally, if you could tell yourself of that night anything, what would it be

That’s a tough one! I’d avoid saying anything too simplistic, like ‘everything’s going to be ok’, that kind of thing – although I got that sense of peace that somewhere, sometime, there would be light again, I think having anyone say anything like that would have made me feel even more guilty about being depressed, and made the situation worse! At the same time, though, I would look to find a meaningful way to say that there is hope in the darkness, even that my experience would be used for good for myself and others.
think I would tell myself that, even if I can’t guarantee how everyone will react, it’s safe to tell people I trust about how I’m feeling; that just telling them, knowing I’m not alone with the burden, brings relief, and that there are people who can, who would love to help, if only I’d let them in