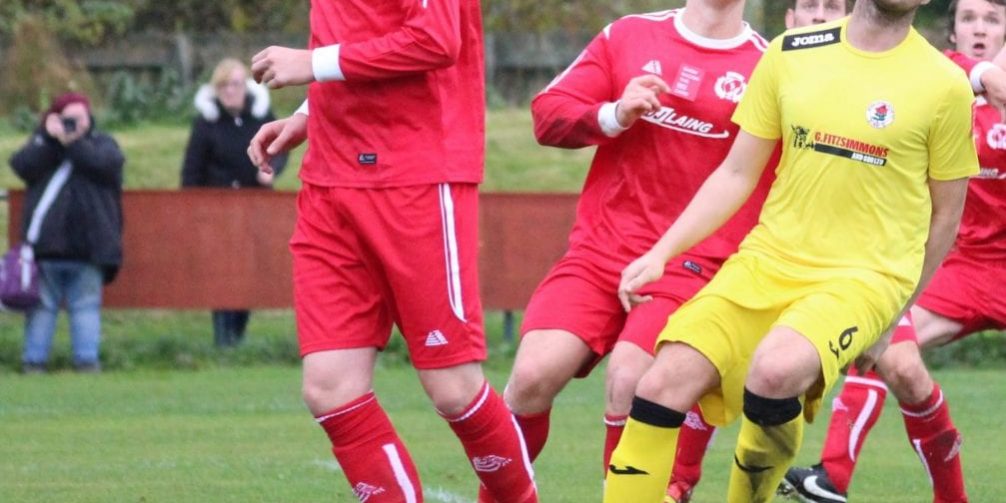 It was nine years ago that Carnoustie last beat Bonnyrigg Rose, the reigning Super League Champions at Laing Park. The visitors were also on a run of 12 games unbeaten, 11 of those victories and only Kelty Hearts had beaten Robbie Horn’s side, that on the opening day of the season. Not any more !

For the first time this season, manager Alan McSkimming was able to name an unchanged starting eleven, with Roddy Black returning to the bench replacing Darren Cooper.

Carnoustie started well if a little tentative as the expected onslaught came from the visitors, however, this was weathered and Panmure came in to the game. The visitors caused problems with their height and quick breaks but the home back four, with Jamie Robbie behind, were in excellent form. The sides went in at half time level and Carnoustie fully deserved to be on level terms.

Panmure’s Achilles heel of conceding goals early in the second half came back to haunt them as Sean Jamieson turned in a cross at the near post on 47 minutes to give the visitors the lead. There is a sense of belief amongst the Carnoustie and they took the game to the visitors, who were forced further and further back. Panmure got a deserved equaliser on 78 minutes when a free kick on the right was swung in by Luke McGeehan, Ewan Buggins was unmarked at the back post to head the ball back across the keeper and in to the far corner of the net. Carnoustie weren’t happy with a point and went looking for the winner. Their reward came in the 86th minute, a back pass was chased down by Jamie McCabe, he managed to dispossess Michael Andrews in the Rose goal. With McCabe in the act of shooting, Andrews made two attempts at bringing him down, the referee allowed the advantage with the ball heading for the corner but Andrews manged to get back to make a save. However, the official then called play back for the initial offence, pointed to the penalty spot and sent Andrews off, as under the new rule, the keeper had made no attempt to play the ball. The drama was far from over as Bonnyriggs sub keeper, Dylan Rooney then saved McCabes spot kick only to see Gordon Macdonald react quickest to bundle the ball into the net. Even then, there was still time for Jamie Robbie to pull of two great saves to deny the visitors as he had done all afternoon. With six minutes of injury time played the referee eventually called time and the three points were Carnousties.

An excellent performance from Carnoustie on and off the park, as last season the game would probably have been postponed due to the deluge that had fallen on the playing surface but they hard work during the summer paid off.