Substitute Pat Martin was the Carnoustie match winner with two goals in the last eight minutes as The Gowfers won 4-2 against Kennoway Star Hearts at Treaton Park.

Manager Alan McSkimming was still without the injured trio of Ryan Dignan, Steven Cook and Ryan Roche and named the same starting eleven that began last weeks game against Thornton Hibs, Vince Edmonds was an addition to the substitute bench

Although Carnoustie edged the first half on chances the 0-0 score line at the break was probably fair but the game exploded in to action after half time.

On 53 minutes,with Sam Simpson poleaxed on the edge of the Kennoway box, the referee allowed play to continue as the homeside broke quickly and as Jamie Robbie parried a shot from the right the ball fell to Liam Craig six yards out and he volleyed his side in to the lead. That lead lasted until the 64th minute when Ewan Buggins thumped a header in at the back post from a Jamie Robbie corner and then on 76 minutes, Sam Simpson rifled the ball home from 20 yards after a poor clearance from the Kennoway back line. The home side were level just eight minutes later when Liam Rolland headed home a corner after Jamie Robbie had missed a punch. Carnoustie were in no mood to settle for a draw and Martin put The Gowfers back in front when he stabbed the ball home at the back post. with two minutes to go Martin made it 4-2 as he smartly volleyed a corner from, Man Of The Match, Jamie Winter past the Kennoway keeper to make sure of a deserved three points. 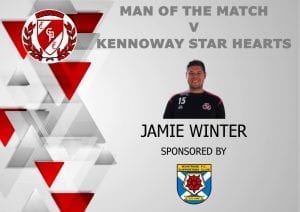