PRE-SEASON BEGINS WITH A WIN

Carnoustie Panmure started their Pre-Season campaign for the season with a 4-1 win at Premier League North side, Brechin Vics on Monday evening.

Manager Alan McSkimming fielded a strong starting eleven and include all three of the summer signings, Jamie Winter, Michael Cruickshank and Steven McPhee as well as former Vics defender Barrie Gourlay, fresh from scoring a match winning half century for Montrose Cricket Club on Sunday afternoon. Missing were Ryan Dignan and Derek Paterson who were both injured and Jamie McCabe and Bailey Steel who were on holiday, while Darren Cooper was working.

Both sides were playing their first Pre-Season games and it took a while for the game to settle but Carnoustie took a deserved lead on 13 minutes and it was an audacious bit of skill put The Gowfers in front. The ball broke on the far right to Winter and with trialist keeper for the Vics, Chris Hutchison of his line, he hit a fantastic lob from all of 40 yards to put Carnoustie in front. Ten minutes later and it was 2-0 great work on the right again from Pat Martin and Ewan Buggins saw Hutchison only able to parry a Buggins shot in to the path of McPhee who scrambled the ball home. The hosts pulled a goal back within 90 seconds when a Winter back pass was under hit and Connor Mitchell seized on the opportunity, rounded Jamie Robbie and cooly slipped the ball home. Hutchison incurred the wrath of the highly officious referee just after the half hour and after a lengthy conversation was shown a yellow card. Carnoustie made it 3-1 on 39 minutes and it was another piece of pure skill from Winter. Cruickshank beat his man on the left before finding Steven Cook, the Gowfers skipper laid the ball across to Winter who hit the sweetest of volleys on the move in to the far corner giving Hutchison no chance whatsoever. Carnoustie were dealt a blow just before the break when Ryan Roche had to be carried off after injuring his knee and was replaced by Sam Simpson with Paddy Conway dropping in to the back four.

After a lengthy half time break that lasted 22 minutes the referee reappeared and Brechin had been reduced to ten men with Hutchison sent off for comments made to the referee. The second half was a testy affair with both sides on the end of bizarre decisions which led to a very stuttery half with neither side able to find any real flow to the play. Vince Edmonds and Jake Mair replaced Pat Martin and Robert Urquhart just after the hour mark and Edmonds in particular found himself in encouraging positions courtesy of his pace. With eight minutes left Sam Simpson made it 4-1, his initial shot was blocked but only as far as Buggins, his shot was deflected back to Simpson who curled his shot in to the bottom corner past the unfortunate young 15 year old keeper.

A good run out for Carnoustie with Jamie Winter and Paddy Conway the stand out players and Steven McPhee completing his first ninety minutes for four years, also great to get both Vince and Danny in to the game for valuable experience, however, there is still plenty to do before the season kicks off for real at the beginning of next month so its 90 minutes in the bag and we start all over again against Hill Of Beath on Wednesday night. 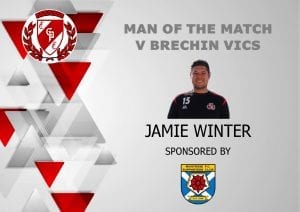