An entertaining game at Laing Park saw Carnoustie send Hill Of Beath off to the East Of Scotland League with a defeat after The Gowfers, after initially taking the lead, had to come back from 3-2 down to win 4-3 and record a record points tally for the club in the Super League

Gowfers boss Alan McSkimming was able to welcome back Steven Cook, Ewan Buggins and Pat Martin to the starting eleven from the side that were a little unlucky to lose 2-0 to Linlithgow and Marc Walker was back to take a place on the bench.

Carnoustie as expected started on the front foot but were dealt a blow when Robert Urquhart who had been the recipient of a dreadful challenge early on had to be replaced by Walker after just 10 minutes. The substitution dint hinder The Gowfers and they took a deserved lead on 20 minutes when Ryan Dignan battled through three players to lob the ball over the Hill Of Beath keeper, Stuart Hall from 25 yards. Hill of Beath levelled things up on 32 minutes when Shaun Leishman seized on a poor clearance to crack the ball home past Alan Cormack before Greig Smith put the visitors in front with four minutes of the half remaining. However, Carnoustie were level before half time, Walker who had been a threat since coming on rifled the ball past Hall and in off the far post in stoppage time.

Carnoustie dominated the second half but it was the visitors who went in front on 66 minutes when manager Kevin Fotheringham turned the ball home from inside the box. The lead lasted just three minutes before Pat Martin equalised for Carnoustie with a great shot in to the bottom corner. The winner for Carnoustie on 73 minutes, a corner wasn’t fully cleared by the Hill Of Beath defence and Adam Harwood showed his strikers instincts by crashing the ball home past Hall.

A great advert for Junior Football in front of a good crowd, unfortunately clashes between these two clubs will now be consigned to the history books. 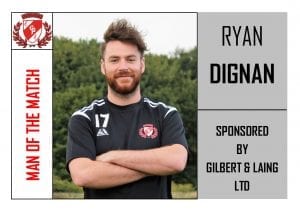