Carnoustie Panmure completed the double over Angus rivals Forfar West End at Laing Park on Wednesday night and in the process helped to compound West Ends position at the foot of the East Region Super League.

The Gowfers boss Alan McSkimming made just one change to the side that thrashed Jeanfield Swifts last weekend with John Roberts coming in for the suspended Bailey Steel.
The home side started much the brighter and scored after just 90 seconds, poor defending from the West End defence saw the ball drop to Jamie McCabe just in side the penalty area and he rifled the ball past West End keeper Daryl Burns in to the far corner. Carnoustie continued to dominate the half without adding to their tally, finding Burns in great form to deny Ryan Dignan and Pat Martin, when he was beaten McCabe saw his effort come back off the post. West End equalised five minutes before the break with their first real effort of the half, led by Jamie Montgomery the visitors broke and Dale Robertson was allowed space to shoot past Jamie Robbie to level things up.

Carnoustie picked up where they had left off in the second half causing plenty of problems for the West End defence and got their reward with eighteen minutes remaining. A corner on the right saw Ryan Roche rise like a salmon to thump a great header past Burns to score what proved to be the winner.

The defeat was made all the more painful for the visitors with the news that Kennoway Star Hearts had beaten Lochee United, leaving West End eight points adrift at the bottom 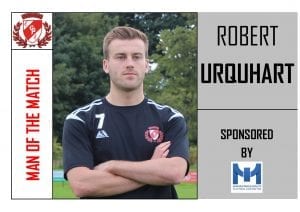