RUN ENDS WITH DEFEAT AT TAYPORT 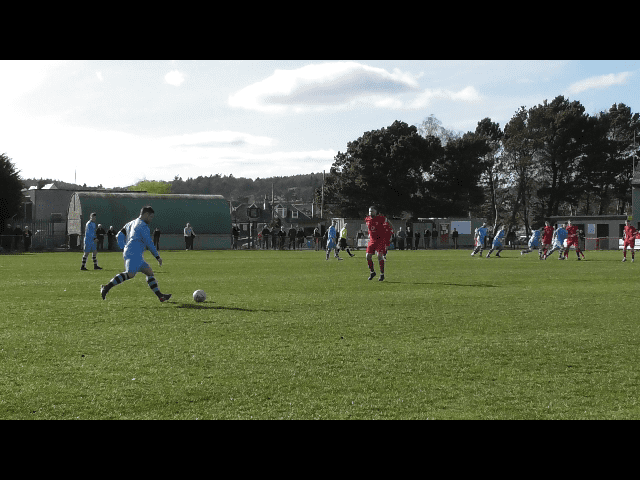 The Gowfers run of five games unbeaten came to an abrupt halt at The Canniepairt where Phil McGuire’s men went down 4-1 to Tayport, however, the result is only part of the story as the visitors dominated the game for long periods and gifted all four goals to Stevie Kay’s men.

It didn’t start well for Carnoustie Panmure with Jamie Robbie feeling a pull in his hamstring during the warm up and Alan Cormack started his first game since the League Cup game at Arbroath Vics, otherwise it was the same starting eleven that beat Whitburn last weekend, Lewis Sivewright replaced Bruce Hearn on the bench.

Carnoustie started well and were unlucky not to take the lead after just 60 seconds when a Pat Martin effort hit the outside of the post, then on 5 minutes Ryan Dignan couldn’t keep his header down from a Jamie Winter corner. There were calls for the referee to take action after Paddy Conway appeared to be felled by an swinging arm from Dayle Robertson but despite the protestations from Carnoustie the referee opted just to award a free kick. Ryan Dignan spurned another opportunity on 10 minutes when he sliced a shot across goal and on 12 minutes Winter saw an audacious lob drift wide with the keeper beaten. Against the run of play Tayport took the lead on 18 minutes, the ball was moved down the right and a speculative cross from Robertson was turned in to his own net by Paddy Conway. Carnoustie were level five minutes later and it was a moment of genius from Jamie Winter, the referee awarded a free kick 45 yards from goal and with the Tayport keeper off his line, Winter struck a sweet shot over the keeper, dipping under the bar to equalise and leave Shaw in the home goal somewhat red faced. Carnoustie continued to dominate and had further chances to take the lead but efforts from Winter, Sam Simpson and Jamie McCabe were all wide of the mark. All the good work started to unravel on 36 minutes, a clearance by Harvey Dailly was returned to Robertson, as he advanced Michael Cruickshank slipped and the Tayport man slammed the ball past Cormack to give the homeside the lead for a second time. It got worse right on half time, poor defending again let in Jamie Gill, his initial effort was directly at Cormack but took a late deflection off Conway to wrong foot the Gowfers keeper and went in in the near post.

The Second Half was all Carnoustie once more with Tayport content to let the visitors have plenty of possession and hit back on the break. The Gowfers had appeals for a penalty turned down after what appeared to be a blatant push on Martin on 49 minutes and on 51 minutes Shaw saved well from Steven McPhee. Some of the Tayport defending was, at times, last ditch and resulted in two free kicks on the edge of the box, however Carnoustie failed to capitalise. The hammer blow came on 86 minutes when on a rare Tayport foray, Dailly slipped as he tried to clear the ball, Cruickshank also failed to clear the ball from substitute Lewis Payne, allowing the Tayport man a clear run on goal and he slipped the ball past Cormack to put an unfair look on the scoreline. It got worse for The Gowfers in stoppage time when Ryan Dignan had a rush of blood to the end and appeared to headbutt Jamie Mackie and was ordered off by the referee.