Manager Phil McGuire included new boys Brian Clark and Paul McLellan in his starting line up with the latter edging the Man Of The Match award over several other candidates.

The Gowfers as expected, started well and took the game to the visitors, it was no surprise when McGuire’s men took the lead on 13 minutes. Brian Clark picked the ball up after good work by McLellan on the right before slipping the ball through to Ryan Dignan who raced clear of the Scone defence before clipping the ball past Josh Gorton in to the far corner. Carnoustie continued to press, creating a number of great opportunities and on another day could have been out of sight by half time but a lack of clinical finishing and two or three good saves from Gorton, The Gowfers only led 1-0 at half time.

The Second half was all Carnoustie and after the break the chances were taken, on 49 minutes the Scone defence stopped while appealing for a foul and an opportunist lob by Steven McPhee from all of 40 yards sailed over Gorton and in to the net to make it 2-0. On 57 minutes, the Scone defence were caught with the ball by Jamie Winter who slipped the ball through for Sam Simpson and after dummying Gorton knocked the ball in the net. Dignan made it four when he finished deftly with the outside of his foot from a great ball from Harvey Dailly on 64 minutes before McLellan scored a deserved goal two minutes later finishing well past the advancing Gorton. McLellan then added a sixth in stoppage time, curling a sublime free kick over the wall in to the top corner that Gorton could only stand and watch.

A great start for The Gowfers but tougher tasks to come and with fixtures coming thick and fast we go again on Wednesday night against Broughty Athletic at Whitton Park. 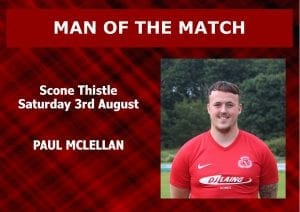