Carnoustie went out of the Quest Precision Engineering Cup to North Region Super League leaders Banks O’Dee at the Third Round stage at Laing Park on Saturday.

Manager Phil McGuire made changes to the starting line up that had beaten Tayport a week before, Cammy Dow was given his full debut while Alan Cormack came in for Jamie Robbie, Jamie Winter and Brian Clark were rested and Pat Martin started in the middle of the park with Steven McPhee.

The Gowfers took a while to settle and neither side were helped by a blustery wind but the visitors had arguably the better of play early on but Carnoustie began to come in to the game and forced Andy Shearer in the Banks goal in to a couple of good saves to deny Gordon Macdonald. There was controversy on 13 minutes when Gordon Macdonald was pulled back by a defender outside the box but managed to squirm free before being felled in the penalty area but the referee’s decision was play on much to the astonishment of the players. The visitors took the lead on 36 minutes, a corner from the right was missed and Jack Henderson, more of him later. headed the ball home.

It was a much improved performance from Carnoustie after the break and the equaliser came on 54 minutes when a great throw from Sam Simpson was met with a delightful flicked header by Martin giving Shearer no chance. The Gowfers were by now well on top and on another day Macdonald could have scored a hat trick but on 68 minutes there was major controversy. Henderson appeared to run in to the back of Gowfers skipper Ryan Roche and while he was on the floor the Banks O’Dee man kicked out at Roche. When the player got up there was a confrontation and heads came together, at that point Henderson went down clutching his face. The Assistant Referee on the far side, 40-50 yards from the incident, instantly raised his flag and after the referee consulted him, Roche was sent off for a head butt of a player nearly a foot shorter, Henderson received no punishment. Carnoustie, despite a player less continued to dominate and could have won the game but a Macdonald shot went inches wide and with the scores level after six minutes of added time the game went to penalties.

Steven McPhee missed Carnoustie’s second penalty  to give the visitors advantage but then they missed their fifth when Cormack made a great save, unfortunately Macdonald’s kick that would have levelled the shootout up came back off the post and Banks O’Dee went through to face Dundee North End at North End Park on March 14th 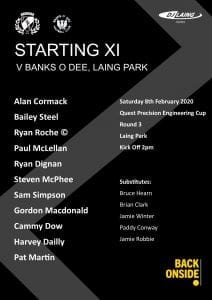